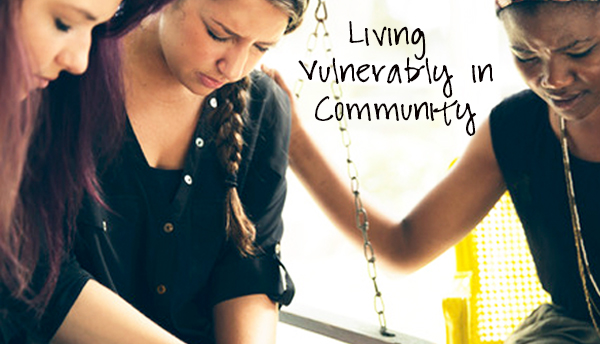 The word vulnerable gets tossed around a lot, especially in the context of community within the church. We desire to be authentic, transparent, and vulnerable, but what does that even mean? How do we create an environment where this happens? The dictionary defines it as “capable of being emotionally wounded.” It means that our weakest points are exposed. In a military context, the goal is to find the vulnerable spot and attack right there. As believers, we’re called to do anything but that. Part of being in community is being a protector—we’re supposed to guard others at their weakest points and be a strong defense against enemy attack.

I was talking with my brother Rob earlier today and he was telling me how important his community has been to him over the last year, so I asked him to share what this looks like in his own life.

Last night my home group at The Village Church in Fort Worth celebrated our one-year anniversary over Italian food, beer bread, and pumpkin cheesecake that I had a (very) small hand in preparing. It was amazing to look around and observe all that has transpired over the course of a year that simultaneously feels like it started either yesterday or forever ago. In between laughter and telling stories, we shared some of the moments that have been the most significant as we have sought to develop meaningful, biblical community.

I thought back to a few months ago when I was offered a job that would have forced me to move out of state. While in many respects it seemed like a dream job, when the offer was made official I was surprised to realize that, among the various reasons I had to stay in Texas, the strongest pull was the desire to remain in community with these people who have become like family.

It’s hard to pinpoint exactly when and how it happened, but something both messy and beautiful has emerged as we have met week in and week out over the last year. Somehow this intangible thing we call community, the thing we extol with our words but rarely experience, has actually manifested itself. And while one aspect of that is simply the fact that we enjoy being with one another, community is much more than social interaction; it requires that we shed the façade of spirituality and engage in honest, Gospel-centered conversation about our sin, our fears and our failures.

Unfortunately most of us approach community with the assumption that we are the only one who struggles or doubts. We convince ourselves that everyone else has it together, and in order to fit in we must appear to have it together as well. So we come together once a week with a carefully arranged veneer of righteousness covering a trembling heart desperate to hear that the gospel doesn’t make the imperfect perfect, but that because of Jesus we are fully forgiven.

And when we understand that the gospel frees us from condemnation, we stop hiding our sin. Certainly we don’t glory in it—but we have no need to hide it. And when we can strip off the pretense of self-righteousness, we can be vulnerable with those around us.

Within the first few weeks of our initial meeting last year, our leaders Kris and Becky shared the story of how their marriage had come to the precipice of destruction; yet, as a result of God’s grace, today their marriage is a beautiful picture of redemption, forgiveness, and biblical commitment. I remember walking away from hearing their story thinking to myself that maybe this was a group of people I could actually be honest with.

Over the course of the following months, each of us was asked to share our own story. We were given an open amount of time at the beginning of a meeting to explain, in whatever words we wanted to use, how we ended up where we are now. The vulnerability from our leaders set a tone for all of us to pull the skeletons out of our respective closets and shine light on the things that have remained hidden. We confessed sin, doubts, struggles, and fears. It was freeing and beautiful.

Just last night I pulled Kris aside to invite him in to a current struggle of mine. We talked, allowing the gospel to saturate our conversation, and he prayed over me for faith, hope, and restoration. Where in the past I would feel ashamed to share this with a church leader, I knew that he would be able to relate and would offer not condemnation, but love and grace.

Vulnerability is inherently risky. We must actively choose to expose to others the weakest and most depraved parts of ourselves, not knowing how they will react. But someone has to go first. Someone has to be the one to put it on the line and risk being ridiculed or rejected. And while vulnerability is high risk, it is also high reward. The joy of doing life with other believers who celebrate our wins and grieve our losses alongside us is like nothing we could imagine. Next time you’re in the situation, remember that there is no condemnation in Christ and ask yourself one question: what’s the worst that could happen?

Mary Margaret Collingsworth is an event project coordinator at Lifeway in the women’s events area. Follow her on Twitter @marymargaretc.

Rob Collingsworth holds a Master of Divinity from Southwestern Seminary and currently serves as the Director of Communications at Criswell College in Dallas, TX. He spends too much time watching Netflix, not-so-secretly hopes to one day lend his voice to an animated Disney character, and is dating a beautiful girl he met in his home group at church. You can follow him on Twitter at @rcollingsworth where he attempts to be funnier than he actually is.