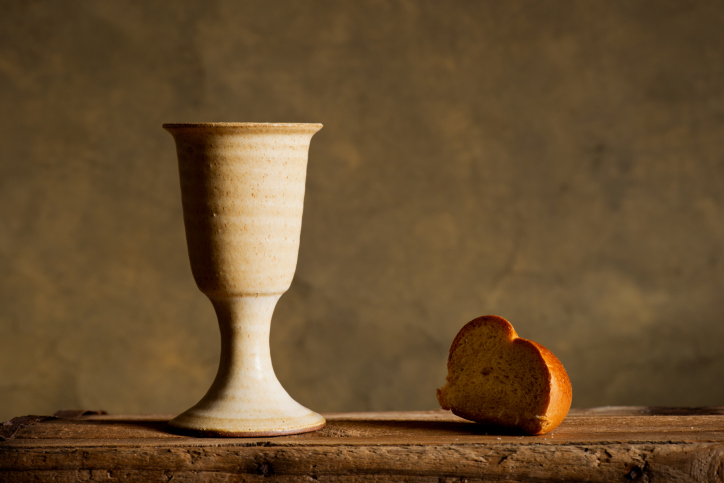 When we think about Maundy Thursday—that last night of Jesus with His disciples before His crucifixion—we think of this passage from Jesus the One and Only by Beth Moore. We’ve put an excerpt of the study here for you as you reflect on Jesus’ crucifixion and resurrection this Easter weekend.

If Christ and His disciples followed tradition, they took the first cup of wine, asked the above blessing, observed a ceremonial washing, and broke the unleavened bread. These practices were immediately followed by a literal enactment of Exodus 12:26-27. The youngest child at the observance asks the traditional Passover questions, provoking the father to tell the story of the exodus. Many scholars believe John may have been the one who asked the questions at the last supper because of his position at the table.

Early church tradition cited John as the youngest apostle. In all likelihood, John assumed the role of the youngest child in the family, asking the traditional questions that provoked Christ to tell the story of the Passover. Might this be the reason Peter nudged John to ask one more question?

The four cups of wine served at the Passover meal represented the four expressions, or “I wills” of God’s promised deliverance in Exodus 6:6-7. At this point in the meal, Christ poured the second cup of wine and narrated the story of Israel’s exodus in response to the questions. Oh, friend, can you imagine? Christ, the Lamb of God, sat at their table and told the redemption story! He recounted the story as only He could have—and then, at the very next sundown—He fulfilled it! Oh, how I pray He will tell it again for all of us to hear when we take it together in the kingdom!

The One sent “‘to proclaim freedom for the prisoners’” (Luke 4:18) told the story of captives set free, spared from death by the blood of the Lamb. Oh, the perfect plan of redemption, secured before God ever breathed a soul into man. Do you see, Beloved? The creation of humankind would have been pointless without this awesome plan of redemption. Before we ever lived to see our first temptation, God procured a “way of escape” for all who would choose it. Indeed, the redemptive decision was sealed and Christ was named the Lamb slain before the creation of the world (see Rev. 13:8). Hallelujah!

Although all four cups would have been observed at the last supper, not all four cups are specified in Luke’s Gospel. We know, however, exactly which cup is specified in Luke 22:20 because of its place of observance during the meal. The third cup was traditionally taken after the supper was eaten. It is represented by the third “I will” statement of God recorded in Exodus 6:6-7.

This is the cup of redemption. I am convinced this cup is also the symbolic cup to which Christ referred only an hour or so later in the garden of Gethsemane when He asked God to “‘take this cup from me’” (Luke 22:42). This was a cup He could partake only with outstretched arms upon the cross.

The imminent fulfillment of the cup of redemption signaled the release of the new covenant that would be written in blood. We know Christ did not literally drink this third cup because He stated in Luke 22:18 that He would not drink of another cup until the coming of the kingdom of God. Instead of drinking the cup, He would do something of sin-shattering significance. He would, in essence, become the cup and pour out His life for the redemption of man.

That most holy weekend, the Passover was completely fulfilled. “For Christ, our Passover lamb, has been sacrificed” (1 Cor. 5:7). God instructed the Hebrew people that they were to continue the Passover feast, celebrating it as an ordinance (see Ex. 12:14). As Gentile believers, we have much to learn and appreciate about the Passover, but we have been commanded to remember the death of Christ every time we observe the Lord’s Supper (see 1 Cor. 11:26).

Christ never took anything more seriously than the cup of redemption He faced that last Passover supper. His body would soon be broken so that the Bread of life could be distributed to all that would sit at His table. The wine of His blood would be poured into the new wineskins of all who would partake. It was time’s perfect night—a night when the last few stitches of a centuries-old Passover thread would be woven onto the canvas of earth in the shape of a cross. Sit and reflect.